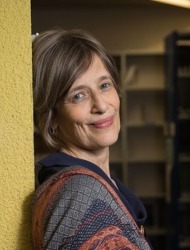 Prof. Ruth HaCohen (Pinczower) is the Artur Rubinstein Professor of Musicology at the Hebrew University. She is the recipient of Rothschild Prize in the Humanities, for 2022.  In 2017 she was elected as corresponding member by the American Musicological Society "for outstanding contributions to the advancement of scholarship in music."

Ruth HaCohen graduated in musicology and Jewish thought and received her PhD in Musicology at the Hebrew University of Jerusalem (1992).  HaCohen is the author of books and articles that explicate the role played by music in the west in shaping and reflecting wide cultural and political contexts and processes.  With Professor Ruth Katz she published two volumes on the paradigmatic turn lead by musical thought from art as mimetic to art as worldmaking.: Tuning the Mind: Connecting Aesthetics to Cognitive Science .   וכן: The Arts in Mind: Pioneering Texts of a Coterie of British Men of Letters (Transaction, 2003).  She has explored the contribution of music to the history of emotions, music and religion, society and politics. She has also published studies on the music of Bach, Mendelssohn, Wanger and Schoenberg, and on Jewish music, with an emphasis on semiotic and theological aspects. Her major work, The Music Libel Against the Jews, Yale UP 2011 won the Otto Kinkeldey Award by the American Musicological Society and the first Polonsky Prize for Creativity and Originality in the Humanistic Disciplines. The book explores the accusation of Jews as producers of noise in a Christian universe dominated by harmonious sounds. Her book with Yaron Ezrahi, Composing Power, Singing Freedom (2017 Heb.) discusses the interplay of music and politics in the west,  from the 17th century until today.  This book also won the Polonsky Prize. HaCohen is about to complete her study on Job the Sufferer, an unlikely Patron of Music.

HaCohen founded with colleagues and eventually directed the PhD Honors program of the Humanities at the Hebrew University. She was the Head of the School of the Arts (2013-2015) and the Director of Martin Buber Society of Fellows(2014-2017). She also officiated as the Chair of the Department (2001-4; 2012-13).  HaCohen is a director at the Israel National Library since 2018 and a member in Van Leer Jerusalem's board of trustees.

Prof. HaCohen has been a resident in in many academic institutions, at the Wissenschaftskolleg in Berlin, Institute for Advanced Study in Princeton,  Cogut Institute for the Humanities at Brown, and Rockefeller Foundation, Bellagio, she lectured at Oxford, Cambridge and Vienna Universities, UNAM (Mexico), Johns Hopkins, North Carolina, NYU, Duke, Princeton, Central European University, Free University Berlin and Konstanz, among others.  In spring 2022 she will stay in Chicago University as Greenberg Professor in Jewish Studies.